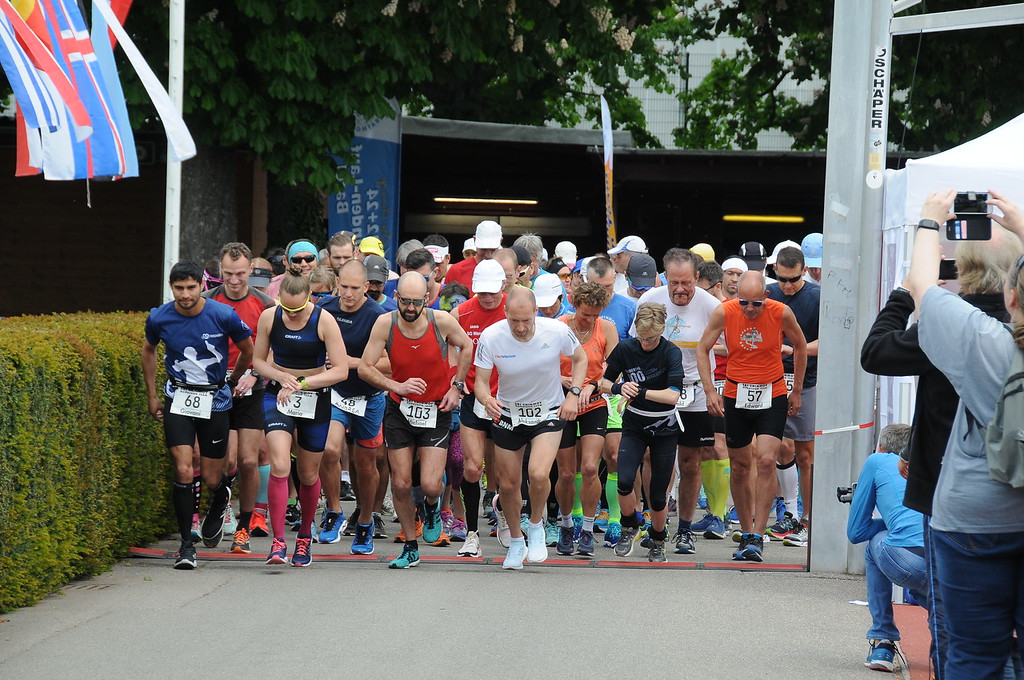 It’s possible that the pain in my back will become so debilitating that I won’t be able to stand, let alone run. And I hope that happens.

This is the sound of the voice in my head during my worst run for many years. As I approach the 50-mile mark, I’m consumed by how I might get out of this 100-mile effort. My knee is sore and might fail. I’m feeling faint and could pass out. I might fall and smash my head so badly that I could drop out. I only came here for a hard training run, and I can leave whenever I want. Each of these thoughts prompts an argument in my mind that wears me down as much as the miles. I’ve only been running for six hours and still have at least another seven ahead of me – the hard part is still to come.

The race is on a 1.2-kilometre loop around a sports ground in Basel in Switzerland. It’s a 24-hour race, but there’s an official 100-mile point, which is where I’ve planned to stop. We started at noon and have been ambushed by an unexpectedly hot afternoon. I’m already feeling nauseous.

The negative voice speaks mainly in half-formed thoughts and punchy language. Too tired. Not right. Don’t want to be here.

Each time I turn into the home straight and run past the timekeepers and the long row of crew tents, I’ve decided to step off the course. And yet I somehow carry on and start another loop.

Get out of this.

I’ve been fighting the voice for years. I have beaten it many times, but it has never been anything like this loud and constant.

By the time I eventually drop out after 12 hours and 90 miles, vomiting and dazed, I’ve been fighting a near-constant battle against the voice for over ten hours. I’d gone out slightly too fast in my hunger for a world record in my age group, and it had been much hotter than I was expecting, but I had still made the run significantly harder than it needed to be. With my first appearance for Great Britain coming up later in the year, if I didn’t do something about the negativity I might fail when it counted most.

Some years earlier, I’d learned to spot my negative voice. The trick is to separate it from other background noise in our heads and see it for what it is – sometimes, we’re so used to hearing it that we don’t realise how much harm it is causing.

It was my mental performance coach, Andy Barton, who got me listening out for it. I was aware of the negative voice I had to argue with during races, but I hadn’t realised how pervasive it was in my everyday life. It would start even before I got out of bed. God, I’m feeling exhausted. Even if I’d been aware of the voice on some level, I hadn’t thought of fighting against it. Now I started to listen out for it, and to consciously provide a counter opinion. Actually, I’m just waking up. It’s going to be a good day.

To be effective, the counter voice has to be relevant and believable. A random affirmation wouldn’t be nearly as effective in helping you get out of the habit of telling yourself things that are unhelpful. For some people, these ways of thinking can be profoundly damaging. I’m so stupid. I’m always clumsy. I’m just someone who can’t do that. If they can listen out for when they think or say these things, and provide a counter statement, the effect can be life-changing. Actually, I’m going to learn. I’m showing courage here.

Before long, I was reacting to all kinds of things differently, like getting out of the house for a run more easily when I was tired. Listening out for the negative voice didn’t make everything effortless, but it certainly made life more pleasant.

During hard training sessions or races, the negative voice was still there, but over time it became less constant and compelling. I might still think: this is so hard, but then I would also think: I can handle this feeling – it’s what I do and I’ve chosen to do this.

Despite that progress, the race in Basel had been a complete mental shit-storm. What had gone wrong, and how could I stop it from happening again? I’d done myself no favours by being unclear about my goals: I was stuck between a world record attempt that would take everything I had and a training run for my next 24-hour race. As a result, I’d not properly planned for either and went off too fast, unsure of what I was trying to achieve. When you are under pressure, it helps to be clear about what you are trying to achieve and why. Anything less than a complete commitment to a clear goal invites argument about the value of continuing.

It was a hot day, and I had begun to feel ill earlier than usual. It was also one of those off days that happen sometimes, but it is because of such days that as athletes we work to strengthen our minds. On this occasion, it should never have been as difficult as it was.

A dark night on many levels

When I sat down with Andy for a post mortem of the race, I realised that I’d long ago stopped actively working on countering the negative voice. After making some gains a few years previously, I’d become complacent. I’d stopped doing the work and had found out the hard way that, given half a chance, the negative voice will reinstate itself.

As humans, we are very good at negativity, probably because being aware of potential dangers was a good insurance policy at points in our distant past when a lot of things could kill us. Self-preservation made it beneficial to remember negative events more easily than positive ones – avoiding danger, sickness and exhaustion was essential for survival. My brain’s default mode is preservation, which in modern life means that I have to work to think in a different way or risk sliding back into ‘factory mode’.

I realised that I would once again have to listen for negative thoughts, both while I was running and in my everyday life, as well as encouraging plausible counter opinions that could become a habit. The new connections I would be wiring into my brain would need plenty of reinforcement before they would become a habit, but was there anything else I could do in the meantime?

What if I could use a superpower to reinforce the positive counter opinion in my mind, making it so loud and compelling that it was impossible to ignore? If I could not only spot the negative voice, but also drown it out and belittle it. But how? With the help of Matt Berry and Lord Flashheart.

In the comedy television series Toast of London, Matt Berry’s character has a compelling and comedic voice, and I can easily hear and recreate it in my head. Matt can also be enjoyed as the voice of Absolute Radio. The brilliant cameos of Rik Mayall as Lord Flashheart in Blackadder are similarly powerful. With Matt and Flash on my team, I was about to turbocharge my domination over the negative voice.

Negative voice: ‘This is awkward.’

When I couldn’t hear Matt or Flashheart, I spoke very loudly to myself inside my head, in a way that my brain found so compelling that the negative voice couldn’t get back onto that single internal auditory channel. After a while, my own over-the-top voice became the main weapon. It took practice, but I became more positive in both training and everyday life.

Six months later, at my next major race, the negative voice was much quieter. And when it tried to get some airtime, I had the tools to quickly deal with it. I’d had plenty of practice, so when I was under duress I was able to deploy the habits that could help me, semi-automatically. I know I’ll need to keep practising and must not fall back into bad habits. Which is a great excuse to watch a comedy series and call it training!