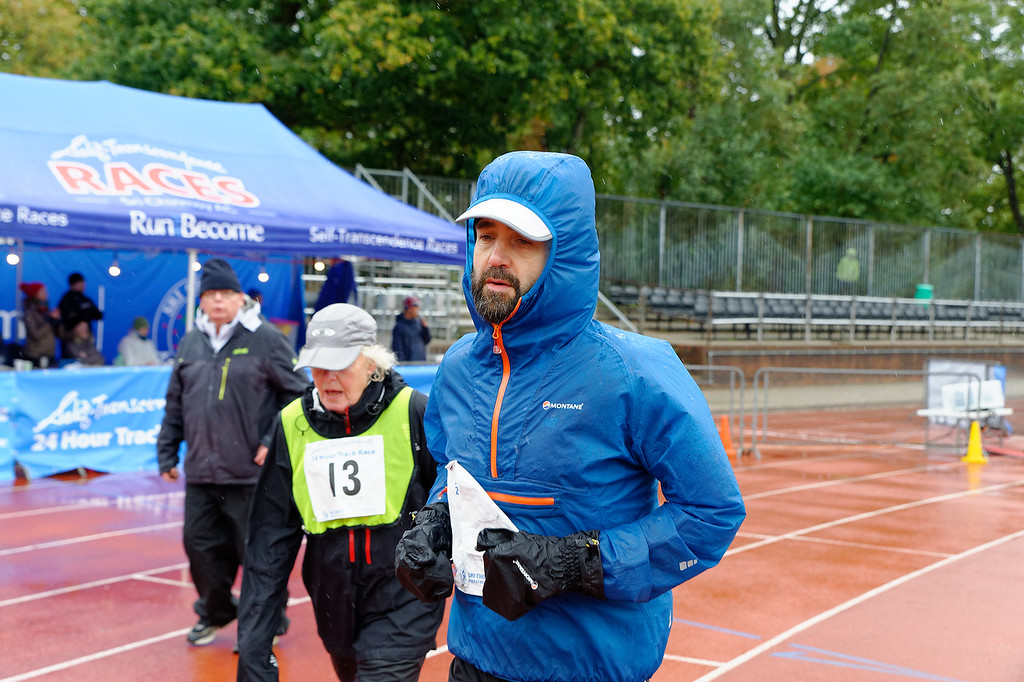 Sharing a track with Patricia Seabrook

I’m running around a track in a torrential downpour, 23 hours into the race. I’m shaking with cold and my head is filled with half-thoughts and vague plans for how I might survive the remaining hour. I am exhausted, nauseous and in severe pain, and half of the 47 athletes who began the race have left the track through injury, illness or exhaustion. Ahead of me on the straight is one man who hasn’t: dressed in heavy waterproof gear, he shuffles on. His name is Geoff Oliver and he is 85 years old.

By the end of the 24 hours, Geoff had ran 77.3 miles in the rain, creating innumerable world records in the process. It’s nothing new for him: five years before, at the age of 80, he ran 100 miles in 24 hours on this track. Just behind Geoff in the race rankings will be 78-year-old Patricia Seabrook, who will have run 73.9 miles. Geoff and Patricia are two of the most remarkable athletes in the world.

At the end of the race my hands are swollen and shaking, and my friends have to help me change into my warm fleece and track pants. A few minutes later, Geoff appears at the prizegiving, dressed immaculately in a jacket and tie. I don’t know how he plans to travel home, but he arrived for the race by public transport.

My hope is that I will one day be like Geoff and Patricia. They are both exceptional athletes who have maintained a hunger for training and racing, and been able to cope with the threat of illness and injury. Running 100 miles in 24 hours at the age of 80, as Geoff did, has to be one of the greatest athletic achievements in human history. As we look to the future, what are the things that might help us reach our own heights?

I made my first appearance for Great Britain at the age of 50. This is possible in ultrarunning, where speed is less important than having a mental edge. Still, I would expect to run faster in a marathon now than I did many years ago, when I set my personal best. I’ve improved significantly as an athlete over the past few years – how is that possible?

I now run 40 per cent further in training than I did when I was focusing on running marathons, and I also train a lot more intelligently. If I trained ten years ago like I do now, my marathon personal best would have been significantly better. I may have got older, but my improvement in training has more than compensated for the ageing.

I’ve also learned to focus on events that play to my strengths. I was never going to set the world alight as a 10K or marathon runner – I just don’t have the genetic capacity to process oxygen or the raw speed that is required. But I do have an unusually good running economy, which allows me to run at a strong pace for a long time. And with life experience, I’ve figured out what I’m good at and have also come to accept what I’m less good at.

Then there is mindset. There are certainly physical realities that come as we get older, but to get the best from what we have requires a belief untainted by preconceptions. The kind of data that should inform our self-belief is not how long we have been alive, but what we have achieved in training and in races. The training run we have just completed at a certain pace does not suddenly become slower the moment we remember that we are 30, 50 or 70 years old. I was speaking to a friend who had decided to make her target time for the London Marathon much less ambitious following her 60th birthday. Despite her achievement the previous year and some excellent training, she felt that having passed 60 somehow invalidated those recent miles and race results. There was no logic to it – it was a consequence of a deeply rooted preconception. When forming our goals we should think about what we have done and how we might reach higher rather than how old we are and what we should expect to achieve as a result.

I remember TV adverts during my childhood featuring people in their forties apparently being kept from decrepitude by vitamin formulations. Our preconceptions of age are informed by films, the media and those close to us. Even the jokes we make and tell each other about ageing have an effect. When we look at people like Geoff and Patricia, we are forced to question our assumptions, and recalibrate our own expectations of our future. We need to seek out the exceptions and make them part of our worldview.

Geoff Oliver on his way to 77.3 miles

We can’t stop the ageing process, but we can choose to either fixate on age or to ignore and even embrace it. I’m fortunate because I’ve never minded getting older. That doesn’t mean that I wouldn’t prefer the youthful skin of my twenties; it just means that I regard the grey in my beard as a curiosity rather than a curse. I might be unable to touch my knees in the morning, let alone my toes, but it’s what happens when I run that matters.

As we get older, there is also a risk that we will accept things that we wouldn’t when younger. A 30-year-old athlete might go straight to a physio when in pain or injured; at 55 they might just decide that a persistent pain is an inevitable consequence of ageing. Of course, recovering from injury takes longer when we are older, but it is too easy to accept things that we shouldn’t. A physio friend of mine describes how clients sometimes come to see him with one problem before finding a fix for something they’d long since decided was age-related. How many people have stopped doing what they love under such false pretences?

Whatever our age, we should also expect that those professionals who treat us will understand our objectives. The doctor or physio who treats an athlete of any level will have their own preconceptions of what a person of a particular age should be capable of. If the doctor’s parents were couch potatoes in their thirties, for instance, then telling someone aged 45 to rest for a couple of months, or to stop competing altogether, might seem like the appropriate solution. An athlete should not blindly accept professional advice to stop doing something they love just because they are older. When I had surgery on my ankles at the age of 47, I made sure the surgeon understood that running was as important to me as football was to any of the professional footballers that he was used to operating on.

I often lack the discipline for strength work; when I’m tired and short of time, it’s the first thing to go. However, I’ve recently realised that it will be essential for my longevity as an athlete, so I’m trying to make it central to my efforts. My goal is to be significantly stronger in ten years’ time than I am now. If I can avoid serious injury it’s a very realistic goal, especially given that I’m starting from a relatively low benchmark. Succeeding in this doesn’t mean that I’ll have beaten the ageing process, just that I’ll have gained through a factor that is within my control. A clubmate of mine, Gavin Evans, who is renowned for his longevity as a marathon runner at the age of 60, has retained superb strength and conditioning from his days as a boxer. The other thing that has not waned is his hunger to achieve, and that’s probably the most important thing of all.

I sometimes joke with my wife that one day I’m going to wake up and decide to let myself go, but I honestly can’t see it happening. Perhaps one day I’ll have to eat those words, but the feeling of being fit is too good to throw away. I get too much joy from the goals and the dreaming to let it all go, and it’s a habit I hope to keep.

Regardless of their age when they start, the new runner who avoids injury can typically improve for five to seven years just through consistency and adaptation, and that’s an exciting prospect for any newcomer. For the more experienced, as we age we can train smarter, ignore unhelpful preconceptions, and try new events to reinvigorate and energise our passion.

As for me, I already have the goal, in 30 years’ time, of taking on Geoff’s record of running 100 miles in 24 hours at the age of 80. I’m already excited about it. Whether I manage one, ten or 110 miles, I know I’m going to try. It might be what keeps me going through the inevitable bumps in the road that lie ahead, and I have Geoff to thank for that.